Free anniversary poems. Show them you remember. Let them know you care and are thinking about them with a high-quality wedding anniversary verse.

It takes two special people,
To make a loving pair.
There's a joy just being around you,
A feeling we love to share.

We send anniversary wishes to you,
For years of joy and pleasure.
May each year keep getting better,
With memories to treasure.

By Joanna and Karl Fuchs

Years together, shared memories and much love make an anniversary special, as this rhyming anniversary card poem describes. 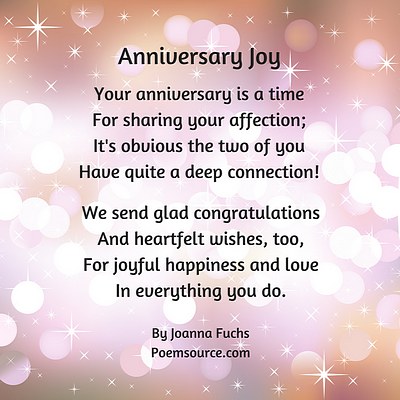 Your anniversary is a time
For sharing your affection;
It's quite obvious the two of you
Have quite a deep connection.

We send glad congratulations
And heartfelt wishes, too,
For joyful happiness and love
In everything you do.

Wedding anniversary wishes should make the recipient glad they are married, as this free verse, happy anniversary poem does.

On your anniversary,
it's time to reflect on all the joy
your marriage has brought you over the years.
Remember your wedding day?
Your wedding photos show
your affection, your passion,
the bond you feel with one another.
Since that day,
many more pleasures have come to you
because you chose to love each other.
As you reminisce,
let those fond, happy memories
strengthen your commitment
to love and care for each other...
forever.
Happy Anniversary!

For their anniversary, say something thoughtful. Wedding anniversary poems can convey positive observations about a marriage, as this anniversary message does.

Your anniversary marks the day
When you both said "I do."
The two of you became as one,
A marriage bright and new.

Now time has passed; your love is strong;
You passed the early test.
Your tender bond grows with passing time;
Your marriage is the kind that's best!

Sometimes wedding anniversary messages can take a look back to compare the marriage as it was with what it is and what it will become. This free verse (nonrhyming) poem does that.

Remember the first flush of love
that drew you powerfully together?
It still feeds the unassailable bond
that makes your marriage so secure.
Remember all the qualities about each other
you found so endearing?
They are still there,
and new ones create sweet surprises.
Remember thinking that this love
would last forever?
Your love has strengthened and grown
into eternal affection and admiration.
Years from now, you'll look back
at this anniversary
and realize you love each other
more than ever.

A Couple to Admire

Two people joined and happy,
You’re a couple to admire.
You seem to have a special bond
All couples would desire.

So keep the sweet love flowing;
May your lives be truly blessed.
We’re celebrating with you;
We wish you all the best.

Short anniversary poems are in demand, so I wrote one.

Your anniversary is a time for reflection,
Thinking of all the good things
That make your marriage special,
The contentment that true love brings.

Each year you’ll have even more
Sweet happiness in store.

Greeting card poems are often bland, but the following anniversary message will make an enduring impression on the couple who receives it. This poem for an anniversary will remind the recipients of why they value each other.

When You Found Each Other

Anniversary poetry should express both congratulations and affection, as this anniversary verse does.

There are few who are so lucky
To have the things you do,
Companionship and friendship,
And loving feelings, too.

As friends we wish these pleasures
Will last forevermore,
For we know that you will ever be
A couple whom we adore.

Anniversary wishes should make the recipients feel good. That's the way this verse is written.

It's your anniversary,
and we admire the good role model
your marriage provides for the rest of us:
Happiness, caring, unselfish accommodation
out of affection for one another.
You two illuminate any room
with the light of love you share.
Happy Anniversary, and many more!

An anniversary is a special time. Anniversary poetry celebrates the joys of marriage. This anniversary wish focuses on a happy couple.

Life bestows love's blessing,
On a very special few.
And I believe it happened,
When life encountered you.

You are a perfect couple,
In a marriage that is blessed;
May your love shine like a beacon,
A guide for all the rest. 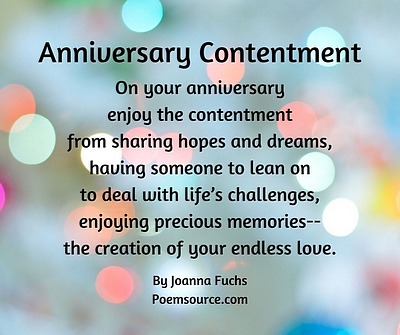 On your anniversary
enjoy the contentment
from sharing hopes and dreams,
having someone to lean on
to deal with life’s challenges,
enjoying precious memories--
the creation of your endless love.

Anniversary messages can be general or specific. This one can be put on just about any kind of anniversary card. It could also be used as an anniversary toast.

No one can know what the outcome
Of spending years together will be.
Being happy together is a gift,
And enduring love is the key.

So here's to a favored couple;
Everything has worked right for you.
May your future bring more of the same,
And your love remain strong and true.

Here's an anniversary verse perfect for the anniversary celebrants who are your best friends.

Very rarely,
God chooses two extraordinary people,
bonding them in marriage,
a unique, blessed union,
a golden couple
who shine like a beacon of hope
for the rest of us—
hope that we can learn
to glow as they do,
with intelligence,
good character, strength
and love.
We feel privileged to know you.
Happy Anniversary
to our most treasured friends.
For us, you are truly heaven sent.

Here's a free wedding anniversary poem for a very happy couple. My marriage with Karl is like this; I hope yours is, too.

Another year for you in wedded bliss.
Did you guess it would still be as good as this?
Days filled with friendship and deep affection,
A relationship of love close to perfection.

It's nice to know a perfect pair like you,
You prove a happy marriage can come true.
I hope with many more years you both are blessed,
And each new anniversary is the best.

Anniversary poems can describe what you admire about the special couple.

On your anniversary,
you are a couple
we cherish and admire.
Knowing you is a blessing,
watching you be role models
who love unconditionally.
Stronger together,
you share life’s burdens
and delight in life’s joys.
May your anniversary
be as special as you are.

This anniversary poem will fit nicely in a card you can give or send to mark the special event.

Now you're husband and wife;
Your marriage is a treasure.
Rewards come all your life:
Joy and peace and pleasure.

See all three pages
of our anniversary poems:

This main page of general Anniversary Poems
for greeting cards, and

Anniversary Love Poems for your sweetheart, and

Anniversary poetry comes in different formats. This wedding anniversary wish is a toast to the happy anniversary couple.

Let's Give A Cheer

Come everyone let's give a cheer,
In celebration of a couple dear.
A couple who in love unite,
And are seldom cross and rarely fight.

To a couple who bring joy to all,
May you laugh and sing and have a ball.
May happiness surround you two,
That is what I wish for you.

Wedding anniversary poems can include God's love and guidance. This anniversary verse does that, and it also cements the bond between the giver of the poem and the happy anniversary couple.

May the good Lord see and bless you,
On your anniversary day.
May He always be your companion,
And guide you on your way.

May your bonds of marriage strengthen,
Holding strong amidst all fears.
And may our friendship stay untarnished,
Through the wearing of the years.

Anniversary poems can send good wishes while commenting on the strength of the marriage, as this anniversary message does.

Have a Bright and Happy Day!

Happy anniversary to you both;
Have a bright and happy day.
Your marriage sets an example;
It shines in every way.

Through time your bond is strong;
It lasts through sun and storm;
You'll always have your love
To keep each other warm.

This free wedding anniversary message, in free verse, is a happy anniversary poem suitable for a greeting card.

You two are an inspiration to the world.
Looking at you, we know that
soulmates can find and keep each other,
commitment means something,
a great team can overcome life's troubles,
and love triumphs over all.

Sometimes, when people marry,
They have not thought it through.
It does not go the way they planned,
And it makes them kind of blue.

But your joining seems a blessing;
You seem such a happy pair.
It makes the ones who know you
Realize you’re really rare.

So we’re glad we can celebrate with you,
On this your anniversary day.
We know your love will triumph
Through your whole life, come what may.

This romantic anniversary love message should create good feelings for a happy anniversary!

We've known each other quite a while,
Yet days spent with you still make me smile.
The sun shines brighter whenever you're near;
You've brightened my life through every year.

It's hard to think of a better mate;
Life with you is really great.
Every minute with you is like heaven above.
Happy Anniversary to you, my cherished, true love.

I am surprised at the number of searches for all kinds of greeting card prayers, including anniversary prayers, so here is an anniversary blessing.

Dear Lord, please bless this husband and wife
With a comfortable home and a happy life.
We pray for love that never ends,
Contentment, joy and lots of friends.

And when each pleasant day is through,
We pray they'll turn their hearts to you.

Here's a toast to the two of you
As you celebrate together;
You're the poster kids for happiness,
In sunny or stormy weather.

Your love continues, warm and bright;
May it shine throughout the years;
You're an example for the rest of us,
So here's to you: Three cheers!

See all three pages of our anniversary poems:

This main page of general Anniversary Poems for greeting cards, and
Anniversary Love Poems for your sweetheart, and

Thanks for reading our wedding anniversary poems! These anniversary verses are free for use on personal greeting cards, provided that the author's name and our Web site address, www.poemsource.com, appear beneath the poem. (It can be small print; just so it's readable.) All other uses require written permission. See our Terms of Use for details.

This 8 1/4 by 11 inch, 469-page paperback contains more than 1,000 poems we wrote for Poemsource.com. Click on the image of the book to go directly to the Amazon.com page where you can purchase it.