Free funny poems on a variety of topics, to make you laugh without cringing. Enjoy our wholesome funny verse!

Funny messages employ a variety of devices to produce humor. This funny verse utilizes a play on words.

How to Paint A Wall

While I went off to work one day,
She decided to paint the wall.
And when I came back home that night,
She was curled into a ball.

Her eyes were closed, she was breathing hard,
Her hair was very wet.
From her head to the tips of her pretty toes,
She was covered all in sweat.

She was wrapped in a jacket made of down,
With a fur coat on top of that.
The wall was glowing with new, fresh paint;
On the floor, the paint can sat.

"Sweetheart!" I cried, with a worried look,
"Are you all right, my dear?"
She lazily opened her lovely eyes,
And smiled from ear to ear.

"I knew I could do it," she said with a grin;
"I followed the paint can notes.
It clearly said 'For best results,
Be sure to put on two coats.'"

My turn signal wasn’t working,
So I asked for help from a friend.
"Stand behind the car," I said.
"Let’s get this problem to end."

I usually disdain bathroom humor, but this funny poem made me laugh. I hope you like it, too. 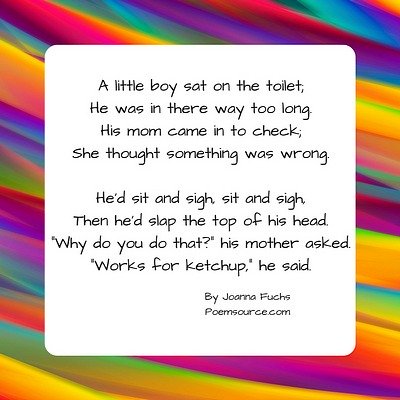 I guess you'd have to remember the old, narrow-necked, glass ketchup bottles to get this funny poem.

A little boy sat on the toilet;
He was in there way too long.
His mom came in to check;
She thought something was wrong.

He's sit and sigh, sit and sigh,
Then he'd slap the top of his head.
"Why do you do that?" his mother asked.
"Works for ketchup," he said.

Funny poetry can use parts of life to which many can relate. This humorous poem uses the humorous parts of aging.

Three old men on the golf course,
(Each had trouble hearing well)
Were playing a round on a breezy day,
When one blew over and fell.

"Windy, isn't it?" said one of them,
While helping the other to rise.
"No, it's Thursday," said the second man.
And they walked off to exercise.

The third man had listened intently;
Now he chimed in, with good cheer;
As he followed the others, he called out,
"So am I. Let's have a beer!"

See All Three Of Our Funny Pages

Funny poems about kids come easily, because they do so many humorous things. This funny rhyme describes a mom trying to teach her son a lesson. She thinks she's won, but...

My five year-old-son, he lies a lot,
And I wanted it to end,
So I told him about the boy who cried "wolf!"
Hoping he would comprehend.

"He kept crying 'wolf!' when there was no wolf,"
I told my son, whom I adore.
"When the wolf came to eat him, he called for help,
But no one listened anymore."

My son's eyes grew wide; It looked like he got it;
My heart was all aglow.
But he dashed my hopes when he nodded and said,
"I was eaten by a wolf once, you know."

Funny poetry can be based on the idiosyncrasies of individuals. This amusing poem falls into that category.

I don't believe in taking excess risks,
But a person can be excessively careful, too.
A friend of mine checks every detail twice;
He's the most meticulous man I ever knew.

We went to the copy store the other day;
I thought we'd be a few minutes, and then be done.
But he counted all his copies several times,
And then proceeded to proofread every one!

Funny poems are often based on miscommunications between people.

“Every time I ask you something,”
The upset husband said,
“You answer with another question,”
He said, scratching his head.

“Could you please stop it,” he queried,
Continuing the chat.
She smiled at him and replied:
“Do I really do that?”

Funny poems can be reality based. This funny poem is based on a true story.

Three genteel ladies went lunching
At a sophisticated hotel.
Their elevator door opened;
They gasped, and their faces fell.

A seven-foot man was inside,
With an intimidating expression.
They got in anyway;
They were the very souls of discretion.

"Sit!" the man yelled, and they sat,
In their luncheon finery,
They went up; then the door slid aside;
The man left, abashedly.

His dog had been behind him;
At lunch they got a note.
The basketball star paid their bill;
"My apologies, and my treat," he wrote.

Funny poetry often includes a misunderstanding of words, as this humorous poem does.

A life insurance salesman
Was talking to a wife:
"What will you get if your husband dies,
You know...at the end of his life."

The woman thought and thought some more,
And then she scratched her noodle.
"Well, I guess, you know, with my husband gone,
I’d probably get a poodle."

No collection of humorous poems would be complete without a limerick. So here it is.

A curious lad from Dover
Crossed poison ivy with a four-leaf clover.
This young man was struck
With a rash of good luck,
Before his experiment was over.

Funny poetry sometimes references stories we've seen in the news, as this humorous poem does.

A dispute among three kinds of cops,
CIA, FBI, LAPD:
Who can catch bad guys the quickest?
We'll set up a contest and see.

A rabbit was set loose in the trees;
"We'll get him first," they all said.
They gathered up all of their gear,
And into the forest they sped.

The CIA with informants,
Questions animals and plants on its list,
And after four months investigation,
Concludes rabbits do not exist.

The FBI searches and searches,
But can't find a single clue.
After three weeks they burn down the forest,
Killing the poor bunny, too.

The LAPD takes an hour;
Solving crimes fast is their habit.
Their perp is a badly bruised cougar,
Shouting, "Whatever you say! I'm a rabbit!"

“How fast can I learn French,” she said,
A worrying frown on her face.
“Why the hurry?” the teacher replied,
“Is this a special case?”

“We’ve adopted a sweet French baby,” she said,
“And we don’t want people to gawk.
We want everyone to understand him,
Whenever he starts to talk.”

Funny poetry can involve a dose of reality, as this funny rhyme does. Send this funny poem to all your plumber friends.

Two old friends met on the street,
Hadn't talked in many a year;
"How's your family,?" asked this dear old friend,
"I'd really like to hear."

"George has a Master's in literature,"
The other said, with pride,
"And Mary's a grad in modern art,
Her career she has yet to decide."

"And How's Willy," the first friend kindly asked,
While the other displayed defeat;
"Oh, Willy's a plumber," she sighed, hanging her head,
"But without him, we'd be out on the street."

This funny short poem uses a situation grounded in reality to evoke a laugh. Most everyone can relate to silly poems such as this one.

I know how it is to need money--
As much as I can get;
My teenager goes to the mall,
And I go into debt.

Most kids' first words are "Ma-ma,"
She said "Vi-sa" with a smile;
She has a black belt in shopping,
And a package from every aisle!

Why is it that humor poems are often set in a bar? I'll leave you to answer that about this bit of humorous poetry..

Larry came into my bar
Every day to drink two beers.
"My brother’s dying; one’s for him,"
He said, his eyes full of tears.

Each day it was the same,
Two beers and then he’d go,
One for his brother, one for him,
He’s sad but sweet, this schmo.

One day he orders just one.
His brother’s dead, I’m thinking.
I asked him, but he replied,
"No, it’s me; I’ve given up drinking." 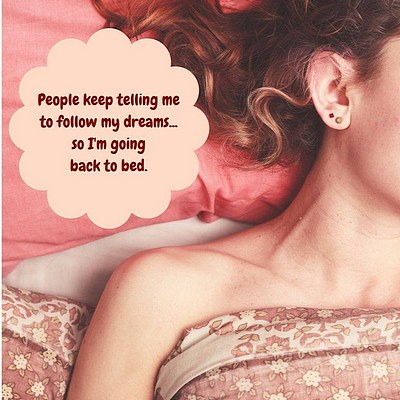 There are lots of funny poems about heaven, like this humorous verse.

A pastor journeyed to heaven;
A cab driver followed him through;
The cab driver got a mansion;
The pastor got a lean-to.

"How come?" inquired the pastor,
"This seems like a charade."
"They slept through your sermons," said Peter;
"When he drove, his passengers prayed."

Life is often funny, but often it's challenging, too.
When life gets overwhelming, it's comforting
to have the Lord of the universe
to talk to and to help you get through.
Curious about the Christian religion? What is Christianity?
What is a Christian? What is Christian faith?
To see the answers and find out how to become a Christian,
check out this Web site.

There are also funny poems
on the following pages:

There are also funny poems on the
Get Well, Thanksgiving and Christmas pages.

Thanks for reading our funny poems! This funny poetry is free for use on personal greeting cards, provided that the author's name (Joanna Fuchs or Karl Fuchs) and our Web site address, www.poemsource.com, appear somewhere on the card. (It can be small print; just so it's readable.) All other uses require written permission. See our Terms of Use for details.