Your Marriage Is Golden

A partnership like yours is rare;
50 years you’ve been together!
You’ve always been a loving team,
In sunny and stormy weather.

Nothing can tarnish your lasting love;
At 50 years, you're gold.
Your affection shines as you go through the years,
With each other to love and to hold.

Our family’s full of joy because
You’re celebrating your fiftieth;
And as your kids, we want to say
As parents, you’re the "niftieth!"

On your golden anniversary,
We hope you have lots of fun.
We’re happy for you, and for us, because
In the parent lottery, we won!

See all three of our
anniversary poems pages:

This page of 50th anniversary poems for greeting cards,

Anniversary Love Poems for your sweetheart

Another anniversary;
Kudos are now due
To this radiant, golden couple:
Your 50th is quite a coup!

You keep on keeping on;
However do you do it?
You make marriage look so easy,
Like there’s really nothing to it.

Congratulations, you two;
We wish you all the best.
May all the years to come
Be just as richly blessed.

A 50th anniversary poem is about a marriage that has actually lasted a half century! 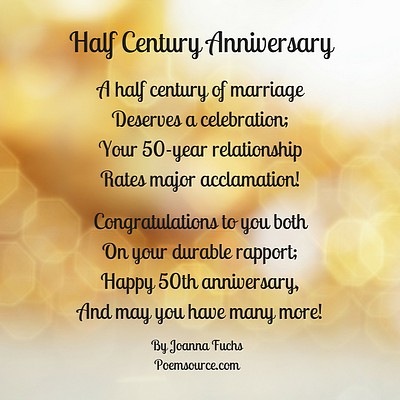 A half century of marriage
Deserves a celebration.
Your 50-year relationship
Rates major acclamation!

Congratulations to you both
On your durable rapport;
Happy 50th anniversary,
And may you have many more!

Half a century ago, they say,
A wonderful marriage began that day.
Two beautiful people joined as one,
And worked together to make living fun.

We celebrate now those fifty years;
We raise our glass and give three cheers:
To partners in life in both work and play,
It’s our pleasure to share your golden day.

This 50th wedding anniversary poem, in free verse, cites some of the benefits of having a compatible partner for life.

Fifty years is quite a while
For most good things to last;
But you’re still together and still in love;
You must share a wonderful past.

We celebrate you this wonderful day,
And hope that your bond keeps on growing;
You’re a pair we should study and do what you say,
'Cause your secret is well worth the knowing!

A golden aura surrounds you two,
a couple representing
all that’s right about marriage,
a pair who have triumphed
over time, over challenges, over all,
and continue to bond, serve and love.
A golden aura symbolizes unselfishness,
generosity, and happy compromise
out of love for each other.
You are an extraordinary duo,
and we wish you
comfort, peace, and happiness
all the years of your lives.

For 50 years, you’ve been the ones
Who showed us how to live.
Your marriage demonstrates it best,
How to love and how to give.

You always had a helping hand,
A smile and a dose of cheer;
Your selfless, sweet devotion
Kept us sheltered, year by year.

You’ve dealt with life like champions
For half a century now;
You’ve blessed all those who know you;
Mom and Dad, please take a bow!

A 50th anniversary verse can have a light touch while it give congratulations, as this free 50th wedding anniversary poem does.

When something works well for 50 years,
There sure isn’t cause for complaint;
Who can deny it’s a remarkable feat?
(You’d think there’d be some, but there ain’t.)

Congratulations to you on this special day;
Fifty years you’ve been loving and living;
Our wishes are for the continuing joy,
That your love and your marriage keep giving.

We've admired you since your wedding;
We appreciate the joy you've been spreading.
We know just where you're heading--
For nothing but more smooth sledding!

Of years, you've accumulated fifty;
We think that's really nifty!
With love, you're never thrifty;
You're really special, if you catch our drifty.

It’s your golden wedding anniversary,
And it makes me so happy to say:
Through the years I’ve gotten to know you well,
And I’m proud to applaud you today.

Now your union is golden; it’s 50 years,
An accomplishment hard to achieve;
I hope you will flourish as more years go by,
And whatever you want, you receive.

An anniversary wish should acknowledge the affection that has held the couple together so successfully before wishing for more good times, as this anniversary verse does.

Congratulations on your feat,
Amazing…the big five-oh.
You’re good as gold
With each other to hold,
The nicest couple we know.

Here's a short 50th anniversary poem, perfect for a card.

So much time, so much love,
Golden blessings from up above.
Sweet affection always there
In a special couple, who always care.

We send our wishes, warm and fond
Congratulations on your 50-year bond!

There are a lot of searches for 50th anniversary prayer, and it certainly is appropriate for this achievement, so here is a 50th wedding anniversary blessing.

Dear Lord, these two have been as one
Through times of trial and times of fun,
50 years as man and wife,
They’ve built a home, a love, a life.

Please bless them in the times ahead
With love as strong as when they wed.
We pray their love will always hold
A solid bond as good as gold.

Keep them safe, keep them true,
Honoring and obeying You.

See all three of our
anniversary poems pages:

Thanks for reading our free 50th wedding anniversary poems! These golden anniversary poems are free for use on personal greeting cards, provided that the author's name and our Web site address, www.poemsource.com, appear beneath the poem. (It can be small print; just so it's readable.) All other uses require written permission. See our Terms of Use for details.